Skip to content
Posted on September 30, 2015November 6, 2019 by Sam
First off, I need to thank a few people & organizations – most notably Ultra5280 and WideFoc.us. I won tickets after entering contests from each and ended up with surplus tickets that I gave away to some people who were really thankful. I’d also like to thank my friend Chad, who hooked me up with a VIP pass. Daps and hugs also to Terry & Kia who really wanted me at the show, and lastly to the Riot Fest Twitter guy. He probably doesn’t know why, but his awesomeness is enough, isn’t it?
So…3rd year for Riot Fest in Denver, 3rd year I was able to attend. Let’s do this.
How I found myself attending this year was a little bit of a circuitous route. Short on actual cash for me & my kids to attend (same old story for everyone, I know), I fell into a bit of a funk for a few reasons, none of which will I stultify the reader with. Suffice it to say, I threw in the towel on making it out to Riot Fest in 2015, missing out on a few bands I really wanted to see – Swervedriver, most notably, but also your Get Up Kids, your Dead Milkmens, and the odd Andrew W.K. and Damned and Joy Formidable.
Listening to a buddhist podcast one day on a long commute, something somehow snapped me out of it. What the hell was I thinking, passing on Riot Fest? I had friends offering me a pass that I turned down because I was feeling a little sad. (Okay, a lot sad.) WHATEVER, DUDE. So I scrambled to enter the last minute contests in hopes that I’d win – and I did! Twice! From WideFoc.us and Ultra5280 as mentioned above. I had tickets for my family and I, and one left over – but then found out that my oldest was working all weekend, so I actually had *two* passes to give, which turned into three once my VIP pass turned up. A friend had posted on Facebook about Riot Fest and I recalled seeing someone respond who said she couldn’t go for money reasons, so I sent her a message & invited her. She was thrilled to accept, bought her husband a pass, and I made the handoff later that day. Making new music friends is awesome.
My biggest stressor was getting to the event grounds – the National Western Complex in Denver (where the stock show is held every year) – in enough time to see De La Soul. I have enough issues going to shows anyway (I have a digestive disorder called ulcerative colitis and live about 40 minutes away from Denver), but throw in that it’s the first year at a new venue plus traffic to Denver on a Friday afternoon, and I was a little skeptical we’d get there in time.
My worries were unfounded as we slipped into the parking lot on a sidestreet, found a spot, walked to will call, picked up our tickets (after a small game of “Where’s Sam’s name on the guest list?”) and headed inside. (Not before my youngest saw a girl so wasted she could barely walk being led away from the entrance by her almost-as-wasted boyfriend.) Made a beeline for the stages at the north end of the grounds just in time to see De La hit the stage.
I saw De La Soul at an X-Fest in San Diego in 1989 (more on that show from Yer Doin’ Great here) and really dug that show. It was at the height of the D.A.I.S.Y. Age and they were full-energy performing for the afternoon crowd, so this was somewhat similar. Except that this time, they are hip-hop princes and did whatever they wanted. They did play “Me, Myself, and I” later in the set. It wasn’t a great set, but it was hot & they were just buggin’ out for themselves. Can’t blame them for that. (More pics & videos of De La & other bands at the bottom of the post)
Next I hustled back to the south end of the grounds to watch The Get Up Kids on the Rebel Stage. A favorite band (although I don’t know much beyond Eudora & Something To Write Home About), I was stoked for my first time seeing them. Not so much kids anymore, and the heat was pretty stifling, but I enjoyed the songs.
They played some songs I knew, some I didn’t know, and they also played an unexpected and awesome cover of “Beer For Breakfast” by The Replacements. Great job for a hot festival set.

Just next to where The Get Up Kids played, Testament started their metal assault on the Rock Stage. I love me some metal, and this was pretty awesome.

The pit was a crazy insane dust bowl. I mean, the band has a song called “Into The Pit,” so what do you expect?

I don’t know much else about Testament, but they have a sweet cover of Queen’s “Dragon Attack.” They didn’t play that, but everyone seemed to be having a good time. We left partway through the set to go catch some of Death Grips, who were scheduled at the same time as Testament.

Death Grips is one of those bands with a brief and legendary history – ducking out on shows, breaking up (or not), but also bringing it live. I felt it would be a good idea to catch them while I could. Can. Did.

Definitely some kind of performance art/crazy shit. I dig that.

I believe that this was the period where I went to hand off the ticket to my friend’s friend (who is now my friend too, hi Rachel!), so I didn’t really see any of the bands playing between 7-8pm. Oh well. I did get to see this amazing sunset, though:

I was able to then catch some of Anthrax‘s set, and shot a few shitty pictures. I gotta figure out my camera. 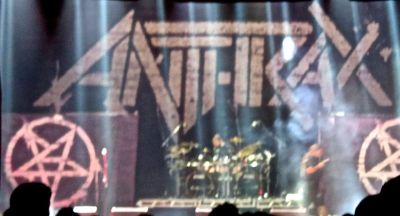 I know Anthrax going WAY back to their crossover rap “I’m The Man” and cover of “Bring The Noise” with Public Enemy. They didn’t play either of those in the short festival timespace, but they did bust out their version of Joe Jackson‘s “Got The Time,” which rocked. I beat feet after that, though, because I wanted to catch some Cypress Hill. (Are festivals kind of like “Band Bingo” for anyone else?)
On the way back to the north side, I stopped to snap a couple of the rides in the moonrise.
Cypress Hill‘s second album was HUGE when I worked in a chain record store back in the early 90’s. (Rhymes with “Ma’am Woody”) We didn’t (couldn’t) play the album in the store, but we sold a ton of their merch – posters & shirts, mostly. I remember them playing “Insane In The Brain” and “How I Could Just Kill A Man” here at Riot Fest, but I don’t know the rest of their music to put names on the songs. They sounded pretty great, though, and it was really crowded in front of the Roots Stage.

I took some more pictures of the Riot crowd during and after the Cypress Hill show. This first one shows how dirty and dusty it was, with all the specks in the air and on the lens:

These two guys were walking by and had a classic look that I wanted to capture. I asked them for a photo, and they obliged:

I wanted to catch Coheed and Cambria next. They have some songs I really love – “Goodnight, Fair Lady,” “Feathers” – and I wanted to check out their live show. My cousin Shannon really loves them, too, so I felt I owed it to her to see them.

Last but not least, we then moved back over to the Roots Stage to watch Ice Cube. Motörhead had cancelled due to Lemmy’s altitude sickness, so there wasn’t anyone else playing anyway. The resulting crowd was thick and deep.

Cube came out by himself for a few songs before running clips from the movie Straight Outta Compton, after which he brought out MC Ren & DJ Yella from N.W.A., along with his son O’Shea Jackson Jr. (O’Shea played Ice Cube – his dad – in the film.) They ran through some of N.W.A.‘s best – “Straight Outta Compton,” “Gangsta Gangsta,” “Dopeman,” “Fuck tha Police.” Really great set.

I didn’t stay for System of a Down, although I heard they were in great form. I don’t know their music beyond “Chop Suey!,” and figured that I’d take the opportunity to pace myself (since I had gotten in for free, and wouldn’t otherwise know what I was missing of SoaD). We walked to the car, hopped on the freeway, and made it home by midnight.

Overall impression? I *really* like Riot Fest at the National Western complex. Riot Fest in Byers in 2013 in an RV was awesome, and I would still love to RV again someday. I didn’t love the setup last year in the parking lot at Mile High stadium. A little too “Warped” for me, and I don’t dig festivals on asphalt.

This year, there was a lot of walking between the Riot/Roots stages to the north and the Rebel/Rock stages to the south, but at least there was the huge arena in the middle where people could get out of the sun, use a real restroom, fill up their water bottles (there was a great station outside as well), and just chill in a regular stadium seat instead of on the dusty or hot ground. There was also the Radicals Stage set up inside, which helped entertain the masses.

Riot Fest has done better each year with more shade and more places to sit, and I thought the National Western complex was just perfect. Maybe a little something to cut down on the dust next year (if it’s hot and sunny), although I don’t know what that would be. The location seems like it would be a mudfest if it rains, but overall, two thumbs up.

The Get Up Kids

The Get Up Kids
Testament
Cypress Hill
Ice Cube

Spotify Playlist of all bands from Day 1: